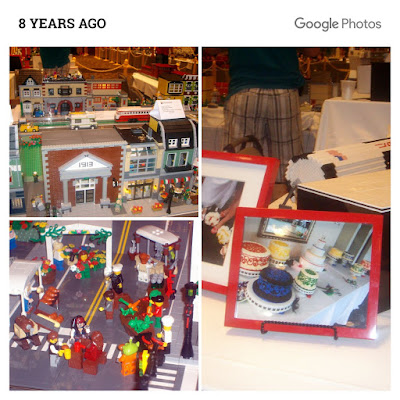 This morning, Google Pictures sent me this collage of pictures from Brickworld Chicago 2011. This was the first show for Kenosha LEGO Users Group. 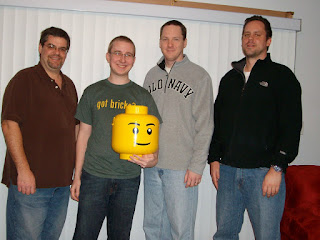 The four of us met each other at Brickworld Chicago 2010. Rich happened to be in front of Amy and I in the line at the LEGO store discount event. He saw our badge bricks... "You're from Kenosha, too? I met two other guys today who live there." He introduced me to Chris and John the next day. We decided on the spot to start KLUG.

We had our first meeting as a LUG on July 25, 2010, just a month after Brickworld. The four of us did a draft of 5 copies of set 7599 "Garbage Truck Getaway". We had regular meetings every other month after that. 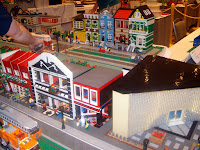 Early on as a LUG, we decided to make Trolley Town a focal point of our displays. Through our regular meetings we started working on a standard for road design, sidewalk height, and even wiring for lights inside the buildings. 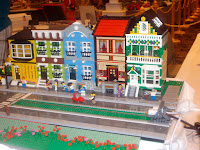 The result that we brought to Brickworld Chicago 2011 (our first show as a LUG) was a two-tier town, with two trolleys running point-to-point with the help of some NXT sensors at the track ends and Power Functions within the trolley cars. The track was 9V track - not because we needed it to power the cars, but because we happened to have a bunch of it. The landscaping leading up to the second layer of the town had a bunch of Sand Green bricks in it - at the time, a very rare color. All of this combined to quickly cement our club motto: "Wretched Excess". 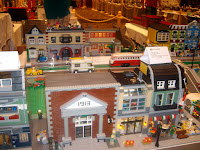 Many of my MOCs from that show are still assembled to this day: The red and white flower shop, black and white furniture store, corner pizzeria, and row houses are all regular staples of Trolley Town to this day. 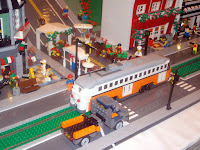 ohn brought his two PCC streetcars, modeled after two of the Kenosha streetcar liveries (4615 Johnstown Traction Company and 4609 Pittsburgh Railways Company). He has since completed cars for Kenosha's 5 other color schemes. 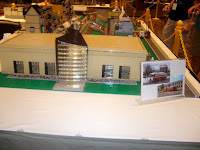 Chris's Kenosha Public Museum model acted as a great bookend for the trolley lines. Modeled after the real building, it got a lot of attention. The KPM made it to many shows after this, until Chris disassembled it a few years later. 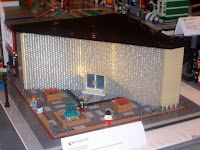 The "Kenosha Art Gallery", what I consider my first large MOC, made its debut as well. This included a curved wall of clear 1x2 plates to act as glass. A later version of this had a slanted roof , which was a fun challenge to integrate with the curved wall. I used the Kenosha Public Museum as a starting point for the design of this fictional structure.

Chris brought his Frank Lloyd Wright "Robie House" model, a spectacular large build which has had a few revisions through the years. 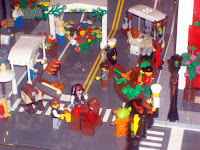 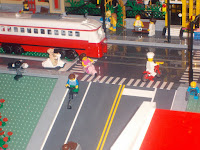 Here's a shot of the second level of Trolley Town, including some of the sand green landscaping. The steepness of the slope down to the first level left room for a fun joke with a bicyclist losing his front tire. 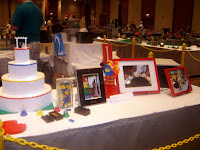 I brought with pieces from my LEGO wedding which happened a month prior. Included were our brick-built cake and cake topper, table centerpieces, and photos from the event.

Not pictured are John's Death Star Disco, and my Lots-o'-Huggin' Bear diorama. John blared his disco music throughout the show hours. You could hear the bass before entering the room. At one point, the four of us got on chairs to do the YMCA... I'm glad I don't have photos of that one, but it does show the core focus of our group - to have fun!

After the show, we gained our 5th member in Dave Xandegar, who helped a lot with promoting the club and growing our member base in his tenure with us. We've come a long way since then. KLUG has over 40 members now, does 8-10 public shows per year. and has meetings every month. We continue to push each other to do bigger and better things, and above all else have fun.